We know some of you disagreed when we threw in our weight behind the Buhari campaign. We believed Jonathan had to go by any means necessary and at the time we were unable to secure the N1 million to register. Long story short, our very own Dr. Brimah has decided to campaign fr the presidency in 2019.

Here is a message from him, please get in touch with us on what you think and you can join his campaign page on Facebook: https://www.facebook.com/groups/AdvancedNigerian/

Get To Know Me: Dr Brimah Launches #AdvancedNigerian FaceBook Platform Towards 2019 Presidential Run

I welcome every one of you #AdvancedNigerian to this forum, the https://www.facebook.com/groups/AdvancedNigerian/ platform for our permanent co-development and currently my presidency campaign and any of your gubernatorial, senatorial, ward or other campaigns.

As you know, by the mighty grace of God, I have decided to lead the revolution to rescue Nigeria from the grips of the Nigeria PLC cabal and the stagnation of politicians, in hearts, on the streets and at the polls.

So you do not move with me blindly, let me tell you a few things about me:

I am 41, a medical doctor, teacher and published disparities researcher. A completely detribalized Nigerian.

I have always been a revolutionist. I led the successful 3-man delegation to my secondary school principal to cancel Mock exams to allow the entire set get more time to study for the SSCE when the academic calendar was too compressed. I DECIDE & DARE

I led a 5-man revolution in my NYSC camp. We spoke and the entire camp had agreed with us to wake the soldiers ahead of the ungodly hour the soldiers planned to wake us in punishment. We didn’t know the commandant was in the hall that night till we finished the meeting and he nodded and walked out. Everyone cowered in fear that 3am when we got up knowing the commandant knew. Only 5 of us braved it and ran and woke the entire camp. The commandant was already seated at that 3am in the grounds. He was actually impressed at our courage and removed the promise to punish us by waking us at 4am as prior threatened, returning it to 5am. I DO NOT RETREAT OR SURRENDER.

Towards advancement, I am the founder of http://NigerianWiki.com, open source encyclopedia of Nigeria est. since 2006

In 2006 before or along with SaharaReporters I established CorruptNigeria.com and started the same work on a very efficient level. However, realizing the name connoted negative and could never become something useful in better times, I took that down. You can view archives of that here: https://web.archive.org/…/200…/http://corruptnigeria.com:80/

Towards global advancement, since 2007 I have been a member of an Intelligence Strategic Think-tank, Through our strategic releases, we turned around Jonathan’s fate as well as the fate of the Boko Haram ravaged northeast as we provoked Jonathan to fight them…Nigeria would have lost Borno and more. The article we published http://newsrescue.com/nigeria-at-war/ whisked Jonathan back half-way through a trip to the south of Africa and he came back, declared a State of Emergency and deployed real battalions to the North East as we recommended against opposition by certain northern elite including Buhari. Again, we would have lost Borno! Our think-tank releases and my articles on ENDS were used to defend Buhari from several attacks…we were the baby of the APC at the time. I AM A SECURITY EXPERT WITH ZERO TOLERANCE FOR TERROR.

I am a pioneer of http://MuslimsAgainstTerror.com est. 2012. I believe we were the first Muslim group to openly and publicly condemn and castigate Boko Haram; at a time Nigerians were begging the north and Sultan to do so to no avail. We turned the Boko Haram story around when we declared for Muslims to defend Churches. http://www.nairaland.com/…/muslim-coalition-rises-up-against and http://muslimsagainstterror.com/communique-fear-none-save-…/
We put a bounty of $10,000 on the head of Abubakar Shekau in August of 2012 which led to the same by the Jonathan government almost 3 months later and US government a year later.[http://muslimsagainstterror.com/abubakar-shekau-wanted-dea…/] Along with Sheikh Gumi, our press releases and his sermons filled the media and turned Boko Haram from something the north was silent and sometimes supportive of [Bamanga Tukur: Boko Haram is fighting for justice; Buhari: Do not kill Boko Haram members http://thenationonlineng.net/buhari-faults-clampdown-on-bo…/ ] and hence GEJ could not defeat into public enemy number 1 and the main topic of the 2015 election. I AM FEARLESS. 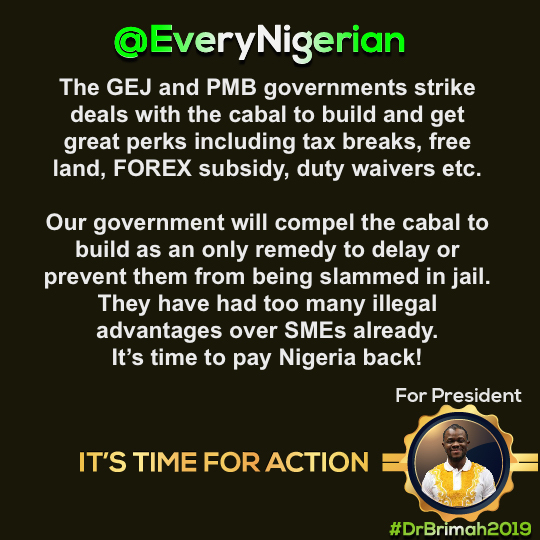 In March of 2013 after the political Boko Haram bombing of Sabon Gari Kano market, I and a friend in frustration as we discussed the event that night came up with the name “Every Nigerian Do Something,” http://ENDS.ng which today has been the first and most notable group to stand along with the Civilian JTF, given awards by them for assisting them fight terror with serious tools we mostly bought from pocket. We financed and raised public awareness to their plight. From binoculars to tasers and walkie talkies, ENDS stood by the CJTF for the years of the war. I requested Jonathan’s permission to gather an army and fight Boko Haram when the army was reluctant. He refused. I could not go because he would have killed me since he did not authorize us. ENDS has very many accolades and appreciation notes from state governments and civilians. I believe we are at the top in used clothes donations to Boko Haram victims. Though I am not the president of the group and maintain a minimal role today, I continue to fund most of ENDS’ charitable activities from pocket, thanks to God. I AM SELFLESS.

2013 we established SNP, http://SovereignNationalParty.com which became a national wave before APC was launched. We stirred Nigeria on the need and path for a new government and youth leadership, consolidating a fervor that APC will later ride. When Jonathan saw us coming, he raised the new party registration fee from N100,000 to N1million. We decided to backdown and released press statements throwing it in for the APC (some members were upset with me for doing so), as we would be unable to register and contest. Jonathan who watched the death of a million Nigerians in Borno just had to go. If not through some parties reaching out to me to run for the presidency on their platforms, SNP remains an option for our 2019 run God-willing.

May 2015 ahead of Buhari’s inauguration as we saw a new government coming in and hoped they shared our vision, I created http://MadeInNigeria.ng the official portal for the Made In Nigeria project on the Nigerian .ng domain. It is self explanatory. I AM A FORWARD THINKER PIONEER.

Finally, to cut a long story short and avoid revealing all my secrets, for those of you who read my writings, you will know that I apply the full gift of intelligence God gave me and that I stand for truth and what I believe even if I am the last man standing there and at risk of losing everything.

To understand why I have initiated this campaign, I implore you watch this video and promise I made in March 14th, 2015 ahead of the elections that brought Buhari’s victory: https://www.youtube.com/watch?v=NclgXNCU2Cw

In this government it will not be about me but about you. My number 1 promise is to remain who I am: a commoner. And to use technology where not physically possible to be in touch with the people of Nigeria at each stage of decision making. I am not coming with a clueless or totalitarian posture. I am coming with YOU! Follow my twitter: @EveryNigerian