I was uncomfortable the moment I received the Mail above. Who wouldn’t be? In the heat of the Occupy Nigeria protests along with the NLC strike, we were being summoned to Abuja for a meeting. Equally unnerving is the announcement that the Airspace would be temporarily opened to facilitate the meeting.

When a Viable Union meets a Recalcitrant Government, something’s got to give. Until the January 2012 watershed, Nigerians had become used to the Oshiomole-esque kind of strike, and the pattern had become predictable. The Government announces an increment, NLC demands a ‘status quo or nothing’ and all of a sudden, pulls a volte face and goes into negotiations.

The Yar Adua administration was burdened with the unpleasant task of negotiating an ‘inherited’ decision with the Labour Union, and reversed the N70 pump price to N65. Intense negotiations however continued on the deregulation of the downstream sector.

The Oil and Gas Unions, PENGASSAN and NUPENG gave a conditional support for deregulation; that the ‘government must provide the necessary succour and palliative measures to assuage the impact of import-driven deregulation within the set timeframe’

PENGASSAN also provided a further condition, that the ‘Original PIB, as drafted by the Rilwanu Lukman Oil and Gas Sector Implementation Committee (OGIC) be implemented’. The Petroleum Industry Bill, as originally drafted, was to eventually end Government interference in the Oil and Gas Sector, and eventually provide a framework for the growth of the Oil Industry and end the inherent Corruption spawned from a Subsidized Market that was import driven.

The Goodluck Jonathan administration, amidst a façade of intense consultation, would spin a notorious surprise on January 1, 2012 with a 117% increment from N65 to N141.
For the first time in the history of pump price hike, protests sprang from a Rag-Tag team of Youths while Labour was still sprawling from lethargy. The Occupy Nigeria logo and T-Shirts sprang up and spates of peaceful demonstrations commenced.

Eventually, the NLC/TUC would announce an ‘Indefinite Strike Action’ commencing January 9, 2012.
Consequently, PENGASSAN issued the directive below to members:

January 8, 2012
To All Branches, Zones and CWC members

RE: STRIKE DIRECTIVE
This is to inform all members of the CWC, Zonal & Branch Executive Committee that the indefinite strike action scheduled from Monday January 9, 2012 in protest against Government approach to Subsidy Removal will go on as directed.
The strike Monitoring Teams at all levels shall ensure that essential services are maintained while all our members are strongly advised to stay at home.
The strike monitoring teams shall go round to assess compliance and give reports through the Team Leaders.

The National Secretariat shall give all information and directive on further development.

At this time, I had joined the ‘Rag-Tag Team’. Setting out to Ojota in the wee hours of January 9th 2012 did not come without apprehensions. Parents who saw the horrors of the June 12 agitations did not want their children involved in any struggle. Moreover, Nigerians had begun to see protests as ‘NLC declared Public Holidays’ at the end of each Strike, pump prices never get reverted to status quo ante. I went, anyway, and before my eyes, I saw the gathering grow to a record ground-breaking watershed that sent strong signals to the Jonathan administration. Not so many Nigerians would realise the level of fear the Ojota Rallies generated in the heart of government, and even Labour Leaders.

For the next five days, I’d set out to Ojota, and by evening, hold meetings and plot strategies for the next day.

NLC’s decision to go into negotiations with the Government in spite of the earlier stance of ‘Revert first, we discuss later’ sent the first distress signal for the heavy blow that would be dealt the Occupy Nigeria movement.

The Save Nigeria Group (SNG) switched the strategy and methodology of protests in Nigeria. Until January 9th, Nigerian protests had been limited to Tyre burnings, and long marches. No one had ever thought gathering in one spot could make such an impact. SNG was however, not alone. Loose coalitions emerged all over, with Ikoyi spinning a great surprise, Corporate Moguls, Celebrities, Medical Directors, amongst others joined the throng. No one would forget Ali Baba’s Truck in a hurry.

For me, the high-point was seeing Muhammed Fawehinmi, the Son of the late human-rights activist/legal luminary, Chief Gani Fawehinmi coming for the Rally in his Wheelchair.

There however, remained a grey-area/loop-hole the Government would cash into: The Convener of the Save Nigeria Group was the running mate of General Buhari in the 2011 elections. This normally would mean nothing in a sane society where freedom of speech/association is sacrosanct. Unfortunately, in a Winner-Takes-All society like ours, IT IS A CRIME TO BE IN THE OPPOSITION! The ballot is meant to be the bullet that kills your Freedom of Speech! 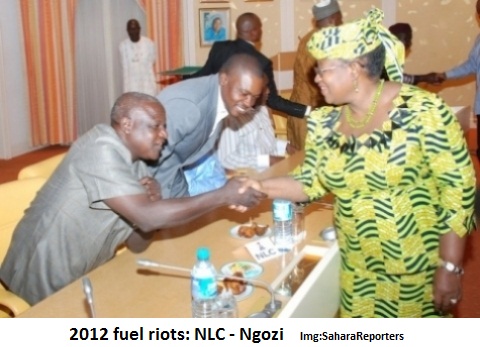 It is worthy of note, however, that when the Late Chief Gani Fawehinmi became silent shortly after running for Presidency under the flag of his National Conscience Party, the general populace appealed to him not to be quiet. But then, that’s another musing for another day.
Against this backdrop, I found the Abuja summons unnerving and initially resolved not to go. What if the meeting turned out to be a ‘Settlement Meeting’?

My good friend, Gbenga Sesan as well as others in the ‘Rag-Tag team’ asked me a question: ‘If you do not go, how would you know what happened?’ At that point, I made up my mind to go, and ensure I cover my Transportation expenses myself. That would be another obstacle, considering the Strike and the draining out of most ATM machines at that time. Gbenga facilitated my ticket fare to Abuja and I got some personal funds on standby for my return.

By Saturday, January 14th 2012, I had met with other PENGASSAN members and we headed for Abuja. We had arrived at the Hotel venue before it all became clear: All Labour Leaders from NLC/TUC had been summoned to Abuja! As a matter of fact, in a ‘We know where you live’ manner, we were lodged in the same hotel wing. This was coming on the heels of the directive issued by PENGASSAN to commence a Systematic Shutdown from midnight of that same Saturday the 14th January, 2012.

The Hotel was a hub of events, from Reporters nodding off on chairs clutching their Panasonic to Union leaders split into several camps, from those sympathetic to GEJ to those who had been part of the Ojota and Abuja rallies and wanted nothing but a total showdown. Apparently fed up with the NLC/TUC leadership insisting on the fact that they were accountable to various NEC (National Executive Council) members, they had been told to summon us all to Abuja. I would later discover upon checking out of the Hotel that all Hotel Bills (Lodging and Feeding) were on NLC/TUC account; that was huge, considering the number of Unions and Leaders.

A lot of Nigerians might not know this, but NUPENG and PENGASSAN were/are still licking the wounds sustained in the 1994 June 12 actualization struggle. Pascal Bafyau of the NLC had betrayed NUPENG/PENGASSAN when the Oil Workers’ Union went ahead with the Shutdown. Pascal Bafyau (NLC) walked free while Frank Kokori (NUPENG) and Milton Dabibi (PENGASSAN) went to jail and remained in Prison Custody without trial till June 16th 1998, a week after the death of General Abacha.
The likes of Asari Dokubo had been making personal calls to threaten the Leadership of the Oil Workers’ Union.

In spite of all these, PENGASSAN NEC meeting held that evening in the Hotel. Tribal/Political sentiments were rife at the onset, ‘nothing must happen to Jonathan’, ‘the day you kill a madman, na im you go know say e get family’ ‘we should not be used by these Politicians, is it Bakare that did not even win a Local government?’ In essence, those who went to negotiate directly with Government had claimed that the Lagos struggle had been ‘hijacked by Politicians’ .Comrade Peter Esele himself had said ‘We’ve lost Lagos (to Politicians), we’d have lost Abuja too, but we were there to make sure the Politicians did not hijack it’.

The PENGASSAN Chairman presided over the PENGASSAN meeting. Along the line, we were addressed by one of the 1994 PENGASSAN detainees, who reminded us that Posterity will judge whatever decision we made that night. He reminded us that although neither himself, Kokori nor others who went to jail in the heat of the struggle had anything physical to show for their struggle, they had a clear conscience about the decision they made. He, however, advised should we opt for the systematic shutdown; we should make sure we had all returned to the safety of our bases before a total shutdown.

Eventually, a unanimous decision was made to go ahead with the Systematic shutdown. Truth is, a total shutdown would invariably throw the Nation into darkness, among other things. For the Old Oil Wells, it would take a sizeable time span to get the Wells back to Optimum Production. In essence, a shutdown is an economic Coup d’etat; that was why Kokori and Dabibi back then were held for ‘treason’.

We sang our Solidarity Song, unsure what would befall us all with the decision, but with the calm assurance that Posterity would judge us for good….while the Communiqué was being edited for print, Comrade Peter Esele came to chat with us. He told us how scared the Government had become and how a Minister was even begging that the Union accepts even a marginal increase to N67 so that the President won’t be seen as weak.

Unknown to us all, the NLC Chairman had gone on Air to pull the greatest Coup on PENGASSAN. He had announced on our behalf that we were not shutting down. Funny how you are in a meeting and made a decision, only to hear a contrary thing on the Social Media who had access to TV that was to cover our Meeting!

The Ghost of 1994 had come calling; we left the Hotel in haste the following morning, my family and friends worrying about my safety. By Sunday, we were back at our bases without a clue how it all changed. I was still in a haze when Omar and Esele came on air. I’d have sworn I saw Omar dictating to Esele what they would tell Nigerians before Esele lowered the Mic from his mouth. Soldiers had been deployed to crush Ojota, and Labour was announcing to Nigerians that from a vantage point of victory, she preferred to Kiss Defeat (Kiss the Feet). That was a Mystery I could not understand, even as an eye witness.

I never recovered…I hope I do someday.

Comrade X is the Pen Name of the author.

Ekekeee.com is vouching for the authenticity of the account below, but has chosen not to reveal the identity of the author to protect him from harm and victimization.